Problem solved! With our new Deployment pipeline feature, Deployment History, all your recent months deployments are available to be reviewed providing details on the target environment, such as: the person who ran the deployment, the deployed items, the deployment note’s content (if been added) and more.

Your pipeline deployments will appear chronologically from newest to oldest: 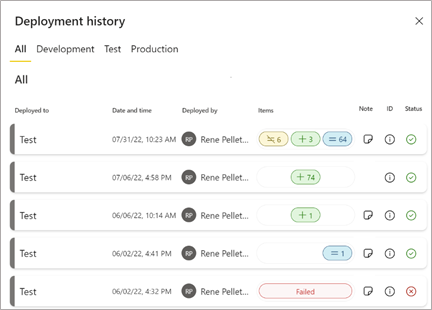 By default, all the deployments are listed on one list. However, you can narrow your scope to focus on a specific deployed target stage by easily filtering this list using the clickable tabs at the top of the page.

Deployment History is already available for your pipelines today so try it out! Learn more.

Following our last announcement in January of launching Azure Devops extension, today we are excited to share that this feature is generally available! As stated, ADO extension contains all the API operations available today for deployment pipelines so they can be used with Azure pipelines, while integrating additional capabilities into the release process such as automated testing, approvals and more. The extension is available for Download here.

Lately, Power BI Apps announced the public preview of Multiple Audiences in the Power BI Apps, which adding the capability to manage an App content by different audiences, individually. Following this change, Deployment pipeline UpdateApp REST API was changed and will not support the action of adding new deployed items to the app. Learn more.

Gobble, gobble - time to gobble up all the updates that landed for SharePoint and related tech in the...
Microsoft Teams