Collaboration is the key to success for any business. Microsoft has been working on having enticing and innovative collaboration ideas for a long time. As a result, using the power to collaborate uniquely, one can grow together and can build a strong connection with others. The same power of collaboration is needed in any app development. For example, for developing an app we need multiple developers with different expertise, experience, and strengths. Here, a collaboration of the developers is vital, or else the app will not be developed properly. Many times, we need to re-work things to avoid any conflict. We must know who is working on which component on another side to make sure the work will not be overridden or done twice.

Considering the above, Microsoft has already provided such features in a few apps as showcased below-

Likewise, the “Co-authoring (preview)” feature has been introduced recently for model-driven apps. Microsoft is giving us another option to collaborate where multiple makers can work on the same app simultaneously while working from the Maker Portal.

Because of this feature, whoever is working on the same app page will get an idea of what changes are being made on which components by another maker in real-time. Let’s explore the same.

What we can expect with this enabled feature?

Once enabled, you can navigate to https://make.powerapps.com/ -> click on Apps -> select the “Sales Hub” app and click on Edit as seen below:

You will start experiencing the other makers’ presence in the top navigation bar and in the left menu bar which is shall display the component on which the other maker would be working as highlighted below:

NOTE: In power apps, you need to open/edit the particular app (e.g. Sales hub) and need to navigate to app pages to see the co-authoring icons.

What do top navigation icons indicate?

For this blog, Let us consider one e.g. If user “Nick” wanted to modify a particular view for the “Account entity” then how user “Mike” would experience his presence on the Maker portal when working simultaneously?

When logged in with the “Nick” user and modifying the “All Accounts” view: 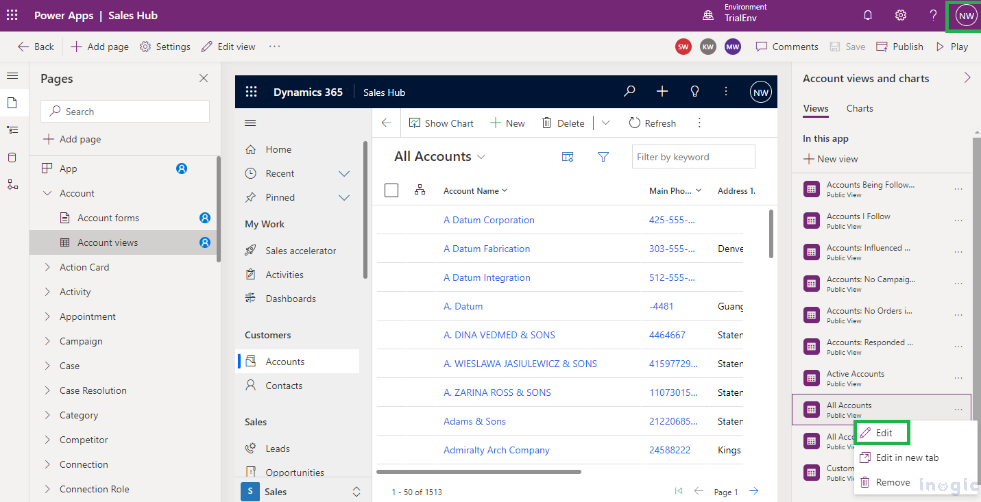 Once he is done with the changes, “Nick” has to save these changes at his end so that they are available for another user.

NOTE: Currently this is one of the limitations is that there is no auto-save functionality, hence, the user needs to explicitly click on the save button to save changes and get them synced with other users.

When logged in with a “Mick” user, working on the same app, the experience on the “All Accounts” view would be as follows-

Now, “Mike” can experience these changes on left navigation bar in real-time that “Nick” is working on one of the particular views amongst “Account views”. 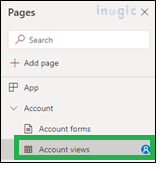 Let’s say “Mike” is also working on the same “All Accounts” view then note that he needs to refresh the page for changes to appear and that is not available in real-time.

Teams chat amongst the makers:

Post saving the changes “Nick” ideally should select the “MW” avatar icon from the top menu which refers to “Mike”, and click on the arrowhead to start the Teams chat. The idea behind this is to keep “Mike” updated about recent changes he did, as shown below:

Upon clicking on arrowhead you will see the option for teams chat named “Chat in Teams” as below:

Once clicked, Teams chat window will open up for starting the conversation with “Mike”, and “Nick” can chat with “Mike” and provide updates about what exact changes he did: 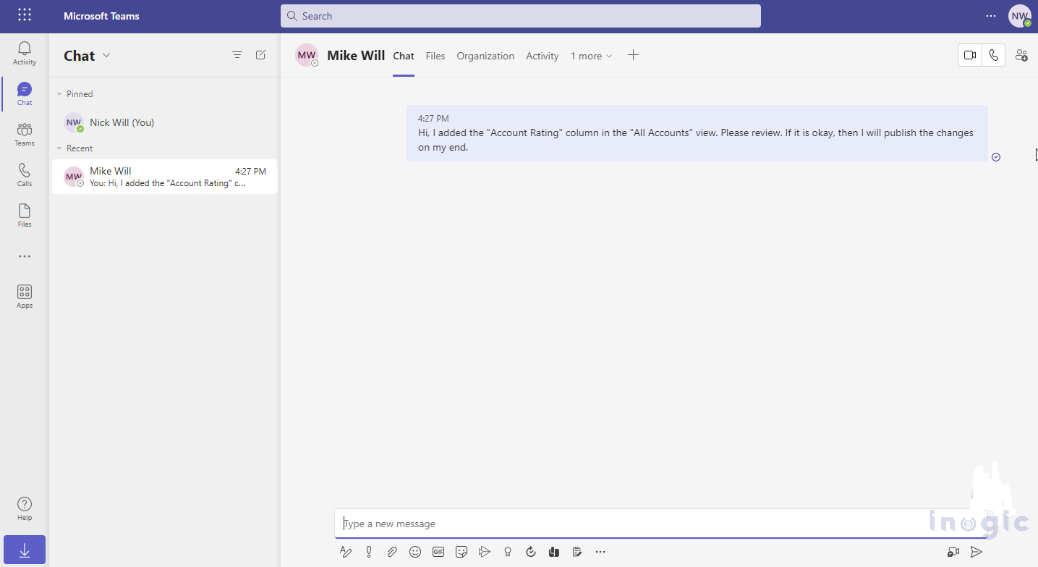 “Mike” can then reply to “Nick” as below:

When any Maker is adding a page, all other makers will see it appearing on the left navigation bar with a sparkle graphic indicator in real-time as shown below. The idea here is to let the maker know that a new page has been added. 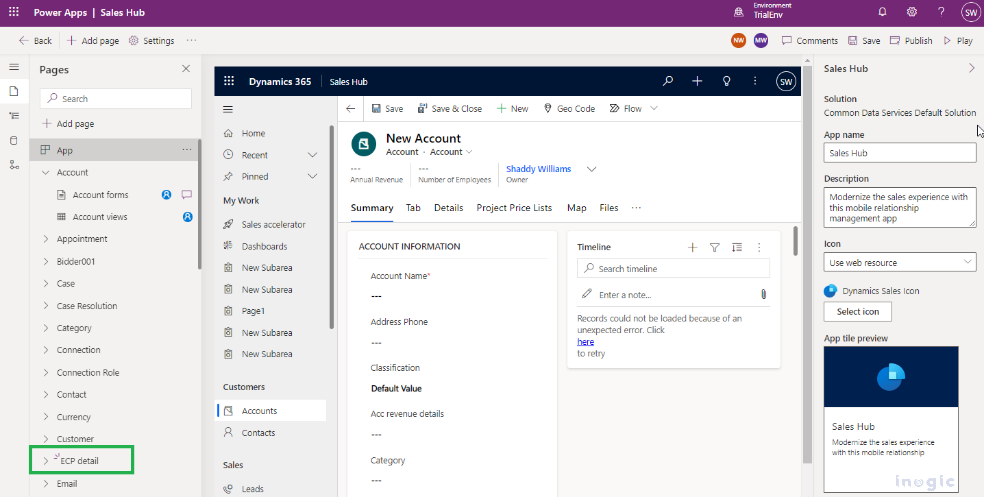 The sparkle remains displayed until the user selects that page. Once the maker selects the newly added page, the sparkle disappears as shown below: 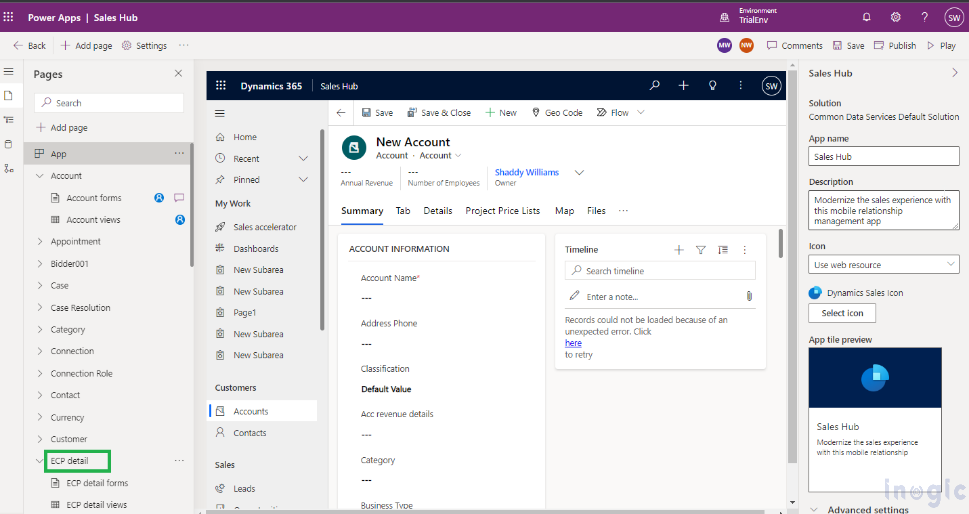 Once Maker removes the page, it disappears for other makers in real-time.

What didn’t seem to work? 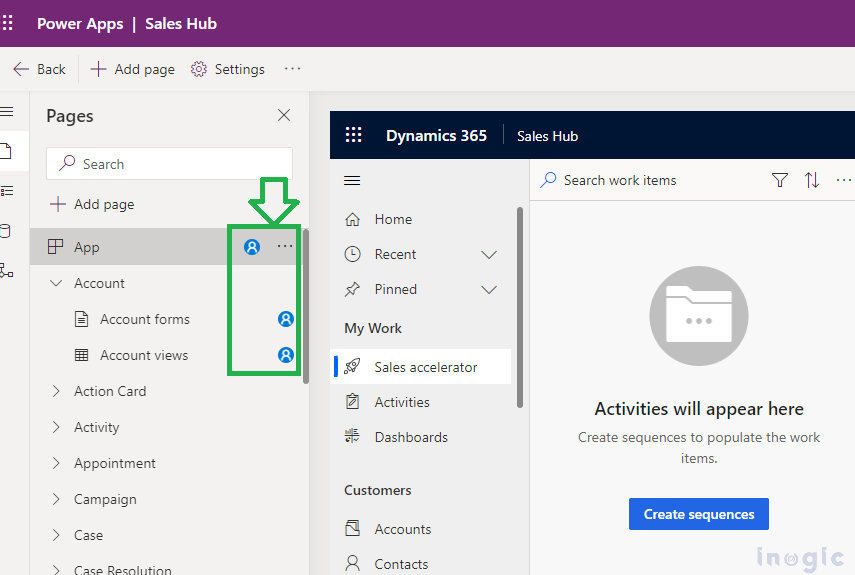 This is a preview feature and hence seems to be a little bit inconsistent but the ability to see other makers working on the same model-driven app is a good starting point to avoid any conflicts when multiple makers start working simultaneously.

How to use optional parameters of Dataverse Search in Power Automate Flow?

How to Create a New Dataverse Environment from Power Apps Maker Portal (Preview)?

Coauthoring and Collaboration with Model-Driven Apps