As with any preview feature, you need to enable Horizontal Fusion in Power BI Desktop explicitly. Display the Options dialog, switch to the Preview features tab, and select the checkbox, as in the following screenshot. Perhaps compare the performance of your DirectQuery reports with and without Horizontal Fusion to see for yourself how your reports will benefit. 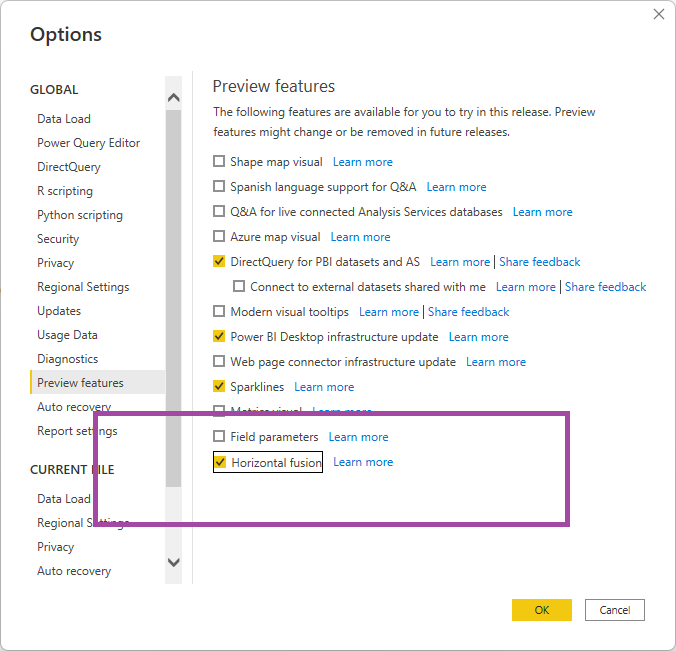 Fusing data queries together and avoiding unnecessary roundtrips is a tried and proven approach to boost query performance in Power BI. Several performance optimizations in the query engine aimed at reducing the number of data source queries per DAX or MDX query, known as DAX Fusion and MDX Fusion, significantly improved query performance for DAX and MDX clients regardless of a dataset’s storage mode. Horizontal Fusion now takes things to the next level.

The initial Horizontal Fusion preview covers some common scenarios, but we are already working on broadening the scope to cover even more of the typical DAX query patterns generated by Power BI reports so that Horizontal Fusion kicks in more often to unlock even more performance gains. In other words, Horizontal Fusion is a continuous effort. So, stay tuned for even more announcements in this area in the coming months!

Announcing the general availability of Viva Sales, an intelligent selling experience in Microsoft 365 and Teams